One of my 2020 resolution was to start blogging again after I stopped seven years ago. So here it is, only this time, instead of a life diary, I’ll be focusing on writing about Ruby on Rails, React and robotics. Welcome!

Almost a year ago, I released Lettergories, a cross-platform multiplayer online word game centered around players competing in finding words beginning with a letter that fits a few categories. It is available on iOS and Android. The idea behind the game came from one of my childhood games I used to play with my friends at school on the back of our notebooks.

The server-side stack of Lettergories is built with Ruby on Rails, with Postgres as the relational database and Redis for queues and background jobs. It started off with the core application for the API endpoints and a Sidekiq background worker to process each game round. 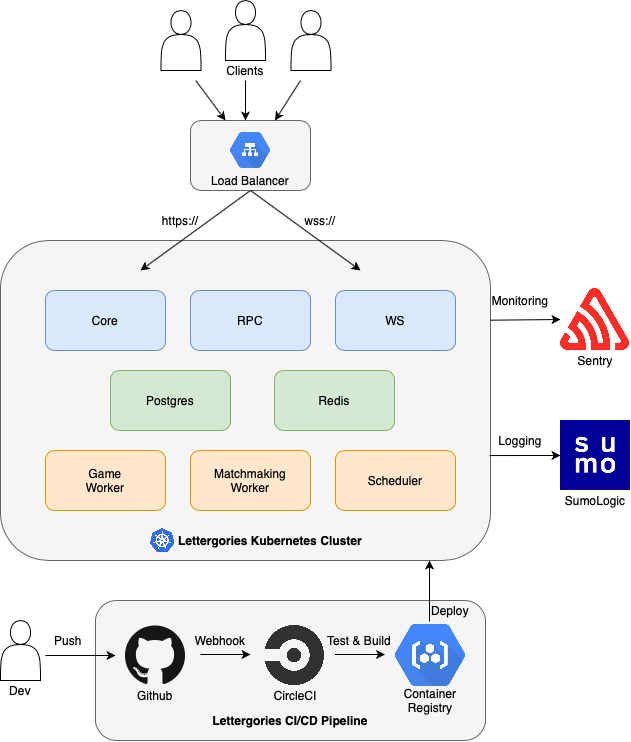 Building a turn-based game, latency has a less pronounced effect but can still negatively impact the user experience. To reduce latency in waiting times between each rounds, I replaced Rails’ ActionCable with AnyCable. With AnyCable, I can use any (more performant) websocket server to replace ActionCable as it forwards the socket management via gRPC. Implementing it has cut an average of 4 seconds of waiting time.

All the services in Lettergories are containerized and run inside a Kubernetes cluster on Google Cloud. Using Kubernetes gives me the ability to optimize infrastructural resources thanks to the more efficient use of hardware.

I use CircleCI as the CI/CD platform. It’s responsible for running tests, building the Docker image and deploying to Google Kubernetes Engine.

Lettergories currently has a little over 100 tests. Upon test succeeding, it proceeds to build the Docker image and push it to Google Container Registry. Before deploying the new changes, it runs database migrations. Afterwards, it performs a rolling update to the staging environment. Once a feature is tested on staging, I will proceed with deploying to production by merging to master branch.

Google Kubernetes Engine integrates natively with their Stackdriver, which helps with resource-level logs and metrics. Application-level logs are collected in Stackdriver too but I drain the logs to SumoLogic because SumoLogic’s log search is better at search and filtering as it allows me to run more complex queries. For monitoring and catching errors, I use Sentry where Sentry will notify me through email whenever there are any issues. Its trace page provides all the context needed to debug